A lot of publicity has been given to the closing down of 20 so called “bogus” schools in Gauteng. These schools were unregistered private schools operating in the Ivory Park area, apparently charging parents about R400 – R450 per month. The about 400 learners in these schools will be placed in public schools in the area. These actions raises a number of questions.

Firstly it raises the question why parents are willing to pay R400-R450 per month for a bogus school whilst public schools are free. According to international surveys that measure literacy and numeracy such as the PIRLS and TIMMS surveys, South African learners score among the lowest in the world. According to the 2016 PIRSL survey 78% of South African Grade 4 children cannot read for meaning in any language. It would therefore be fair to state that the education provided in public schools can be described as bogus education. It is therefore not surprising that parents are willing to pay in order to ensure that their children are getting a real education. The Gauteng Education Department is therefore the reason why parents send their children to bogus schools.

Secondly it raises the questions why the bogus schools exist. Whilst the constitution states that citizens have the right to operate private education institutions, as long as these institutions are registered with the state. However the cumbersome and expensive registration process of the Gauteng Education Department makes it almost impossible for low cost private schools to exercise this right, which causes many of these schools not being registered. The Gauteng Education Department is therefore the reason for the existence of bogus schools.

Thirdly is raises questions why there is so much media attention given to this incident. The maximum sentence for operating an unregistered school is a fine or imprisonment up to three months. This means that the law views this offense as a minor offense, similar to a traffic offense. Given that the media only selectively reports on major offences that are sentenced with life imprisonment, it raises suspicions when the media decides to report on such minor offenses. If the law views the operation of a bogus school as a minor offense, whilst there are many mitigating circumstances, it seems that reporters have an ulterior motive when they create a perception that these schools are committing serious offenses. 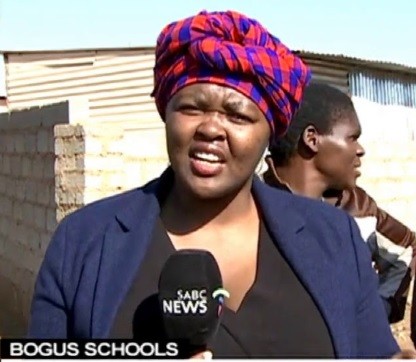