Parents and teachers have until Friday 10 November 17 to comment on the draft Basic Education Laws Amendment (BELA) Bill which proposes to take away powers from School Governing Bodies (SGBs) and choice from Home Schooling families. Unfortunately, most of these people are still asleep and need to wake up by Friday.

It would increase your tax, raise school fees and increase costs and administration home educating.

Depending on provincial education policy, weakened financial viability of quality fee-paying public schools may lead to an exodus, retrenchment of teachers and thus loss of quality. School SGB's would have less power over admissions policies and financial verification of parents asking for exemptions, thus meaning parents who do pay fees will be subsidising more who don't. Where this has happened already, parents not getting value for money have left - allowing the school to slide. Parents will be less motivated to participate in SGB's where they don't have real power. Education quality, safety and fighting corruption are all dependent on parent participation. The government says by centralising power, this bill will fight corruption, but actually will take power from parents who are best able to stop it. It will undermine good schools rather than helping weak ones.

Six hundred thousand school staff as well as their spouses & partners would have their privacy invaded by having to disclose their financial interests including property, shares and 'in kind'.

The state could over-rule governing bodies language and admissions policy, especially threatening the remaining 1 out of 20 single-medium Afrikaans schools. It gives the state power, that it could abuse to send Afrikaans the way of Gaelic. If it was wrong in 1976 for the government to force language policy on schools, why is it okay now?

It would be more difficult for schools to rent facilities to churches and independent schools. This and loss of teacher appointment powers to SGBs would indirectly impact religion. Strong parent involvement in schools is important to protect children and uphold family values.

BELA assumes and by inference compels home educators to follow the public school curriculum, grade system & final exam and have annual assessments at their own expense which many don't want to. Other assessment regulations make this difficult & expensive for them and thus less viable. They may not commence till they get permission.

Implementation powers are in the hands of provinces, likely making education a key issue in provincial elections and educational refugees moving province. The consultation process seems unequal, with some stakeholders consulted early and the rest have an unreasonable deadline.

BELA is the most radical change in education law since the 1996 Schools Act, and would put education back in the control of the state, as it was in the apartheid era.

The government says it wants comment to 'fine tune' BELA. We say it needs an overhaul and is not nearly ready to go to Parliament.

Homeschooling parents can click here to download documents for documents with instructions on how to write a submission against the BELA Bill. 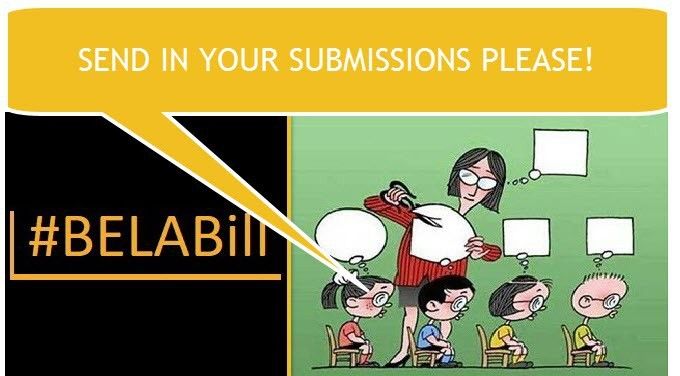 The week a Tsunami crushed into the DBE
State wants to now hijack home education (by Pesta...